Why I can’t write another post about the importance of employee engagement. 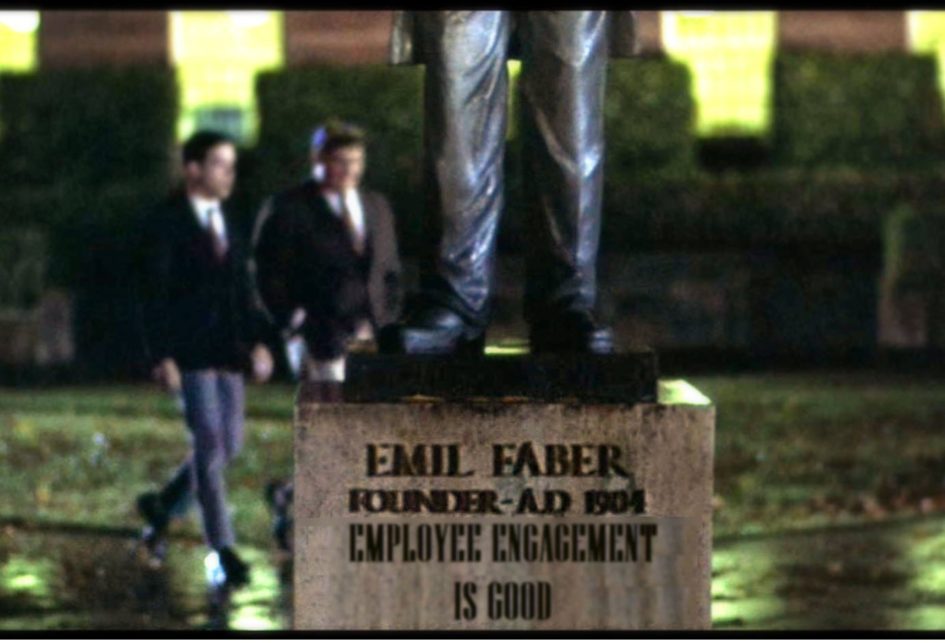 Writing another post on employee engagement would be like writing a post about why fire is good. Or why electricity is good. I think they’ve actually changed the opening scene of Animal House to now show “Employee Engagement Is Good” engraved on the base of the Emil Faber statue.

Believe it or not employee engagement has been on the minds of businesses since it was “invented” in 1990. Before that it was still on business people’s minds but called satisfaction and then it morphed into “commitment.”

So, we’ve been talking about engagement for over 25 years.

The “business case” for it showed up in 2002 and “proved” engaged employees drive better business outcomes.

With that prodding we then started investing in engagement. That was 15+ years ago.

And according to HBR $720 million was spent on engagement in 2015 and they anticipate it to grow to $1.5 billion.

And we have squat to show for it.

With all the time and treasure invested engagement on average in the U.S. still hovers around 30% (which I think may be the natural resting place for it regardless of intervention.)

I don’t know about you, but to be talking about something for 25 years, investing almost a billion dollars ANNUALLY to influence it, and having absolutely nothing to show for it is the classic definition of either stupidity or insanity.

We Keep Saying the SAME Things

I used to be a rather prolific writer on my first blog about how to engage employees. Over 1,000 posts in my first 6 years (2006 -2013). Unfortunately, many of those old posts are gone now due to some ill-advised business “restructuring”. Now I write maybe 3 or 4 posts a month. And those aren’t focused on employee engagement. They are mostly about incentives and the psychology of influencing behavior rather than “engagement” per se.

I think the whole discussion on engagement started getting bad when the marketing geniuses sold us the idea that “marketing” and “content” are equivalent. It didn’t matter what you said – just say it. That sparked a content arms race with so much duplicate content from everyone trying to increase SEO that even IBM Watson would throw up its digital arms and cry “Uncle!”.  It’s a battle of the bands with 100 death-metal bands encircling you playing different bad songs with out of tune instruments at the same time.

Think about it – there are only about three consultancies releasing original content and 2.6 billion companies who then rush to write a blog post that uses that research and says exactly the same thing.

Next time you see a post on employee engagement I dare you to find the “new” content, “new” insight, “new” learning. If you do, send me a note. I’d love to see it. But I’m pretty confident that all you will see is: This is why I don’t write as much about employee engagement any more.

I don’t want to be complicit in fertilizing the kudzu of “thought leadership” around employee engagement choking out true value.

If there is an executive who isn’t working on engagement in their organization then they don’t deserve my content and truth be told, are probably actively ignoring engagement to boost some selfish financial measure.

Bottom line – another article pointing out the benefits of engagement isn’t going to change anything.

Until the corporate world understands that engagement is a manager issue focused on one-on-one human connections and NOT a system or software solution, we will continue to push this rock up the hill.

And I’ll continue to shake my head when someone publishes another ground-breaking tome on why only purple M&Ms drive true engagement.

Just thought you’d want to know why I’m not “prolific” any more.